While the Thanksgiving weekend kicked-off the holiday season of bright lights and joy across America, Paper Mill Playhouse charted its own seasonal stars with a high-spirited, megawatt premiere of Irving Berlin’s “Holiday Inn.”

As the second consecutive production of the Tony Award-wining theater’s 80th anniversary season under producing artistic director, Mark S. Hoebee, it was a delightful holiday-themed uplift!

The two-act musical was inspired by the music and lyrics of Berlin’s classic 1942 Universal Pictures film starring Fred Astaire and Bing Crosby, a romantic comedy time-capsule about two ex-showbiz friends toe-tapping for the same small-town girl who channels her inner diva in Edith Head’s impossibly-glamorous gowns.

Director Gordon Greenberg, who co-wrote the well-paced book with Chad Hodge, took musical and artistic liberties in adapting Berlin’s tale from screen to stage, which first opened on Broadway in 2016 in a Roundabout Theater Company production that netted a Tony Award nomination for Best Choreography via its choreographer, Denis Jones.

Greenberg played to Berlin’s strengths by curating his vast musical oeuvre into a tasteful mélange, no easy task: Berlin (photo above) wrote over 1,200 songs in his lifetime! “White Christmas,” “Cheek to Cheek,” and “Stepping out with my Baby” were just some of the 20+ chestnuts chosen from the massive catalog of beloved melodies.

The art of Berlin’s score was entrusted to music director, Shawn Gough, a lively maestro who led the pocket square orchestra with Bernstein-like swagger, snap, and bravado on the podium. Keyboardists, pianists, percussionists, bassists, and woodwinds nailed the right rhythms from conga to blues to ballads, and gave the cast room to breathe between the story’s lightning transitions.

Jones’ high-flying, Tony Award-nominated choreography relied heavily on the enormous range and stellar synchronicity of its talented ensemble. Set against festive holiday trimmings, Act I’s memorable “Shaking the Blues Away” was an incandescent, circus-themed tap starring Anna Harada as Louise, the resident caretaker, pants-wearer, and matchmaker with joyful, nonstop, nimble energy and a commanding Ruth Etting vibrato. Act II’s “Easter Parade” was a pageantry of spring finery (and millinery), and made creative use of the orchestra pit catwalk.

Greenberg whittled-down Berlin’s characters into genial archetypes (such a Danny, the veteran talent agent, played by a cynical but simpatico Jordon Gelber) transposed to an optimistic time-stamp — 1946 — no 1942 wartime doom and gloom here!

While the movie defers to the calendar’s big and small holidays underpinned by Christmas — it opens with Fred Astaire in a tap-off with a Goodwill Santa under Christmas Eve snow — the stage production spotlights romantic drama to maximize the happy Hollywood ending. Like Louise says twice, “There’s no bigger holiday than a wedding.” And if you didn’t hear her the first time, the curtain rises on a Brooklyn nightclub with an engagement-themed number, and it falls on a rustic country wedding (photo above).

As soon as Jim realizes that farm life isn’t what he expected, he falls in love with a local school teacher, Linda Mason (played by Hayley Podschun), the former owner of the farmhouse with hidden Broadway talent. Rodriguez’s Jim was charming and affable with a pleasant, flexible lyric baritone, which showed great tenderness and vulnerability in the book’s tender moments.

Linda sticks by Jim’s side as the farmhouse becomes an inn to avoid foreclosure, with bank notices hand-delivered by the precocious Charlie Winslow, played by an affable Jian Harrell (alternating with Aidan Alberto.) Podschun brought unflagging spirit to a role scripted for wholesomeness. She was witty and strong-willed, with a heartfelt, introspective “Nothing More to Say” soliloquy. Her icy-edged soprano thawed for a sweet “White Christmas” duet with Rodriguez under Jeff Croiter’s flattering lighting designs.

Jeff Kready as Ted Hanover brought a clean-cut, athletic flair to the role of the narcissist who comes between Jim and Linda before luring her away to Hollywood. Kready had big, Fred Astaire tap shoes to fill with the bang-snap-happy “Let’s Say it with Firecrackers” number, and he did it with easy charm and skill. 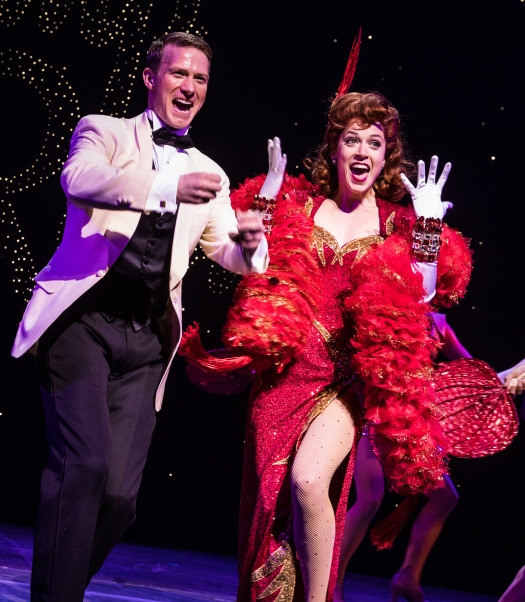 Irving Berlin’s “Holiday Inn” runs at Paper Mill Playhouse from November 21, 2018 through December 30, 2018. Tickets are available at the theater’s box office at 22 Brookside Drive in Millburn, New Jersey, or online.